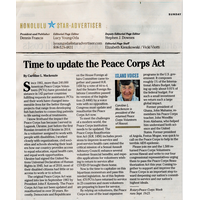 Since 1961, over 240,000 American Peace Corps Volunteers (PCVs) have provided assistance in 142 partner countries fulfilling requests for assistance.  PCVs and their work have changed innumerable lives for the better through projects that range from developing fish hatcheries to connecting patients to life saving medical treatments.

I know firsthand the impact the Peace Corps has because I served in Lugansk, Ukraine just before the first Russian invasion of Ukraine in 2014.  As a volunteer assigned to work with people with disabilities, I worked closely with organizations, civil societies and schools showing their leaders how our country provides access to equal education, equal health care, and equal work opportunities.  Ukraine had signed the United Nations Universal Declaration of Human Rights in 1945, but as of 2010, most of their disabled citizens had little or no access to work or to school.

To meet the challenges of a modern world, the Peace Corps institution needs to be updated.  The Peace Corps Reauthorization Act (H.R. 1456) includes provisions to improve in-service and post-service health care; extend the critical mission of a Sexual Assault Advisory Council; enhance several volunteer financial benefits; and expedite applications for volunteers wishing to return to service after COVID brought them home.

Now is the time to capitalize on this bipartisan momentum and pass this needed legislation.  As of this September, 470 PCVs have returned to service in 23 countries and more volunteers are preparing to leave for service.

By relying on volunteers, the Peace Corps is one of the least expensive programs in the US government.  It composes roughly 1% of the International Affairs Budget, taking up only about 0.01% of the federal budget. For such a small investment we return such a large global impact.  Former President of Ghana, John Mahama, remembers his Peace Corps teacher John Woodfin from Alabama, who helped him understand both science and the United States. Former President of Angola, Festus Mogae, was quick to call on the Peace Corps to help in the terrible AIDS epidemic.

Please join me and the 1,500 Returned Peace Corps Volunteers across Hawai’i and write to our four Congressional representatives urging them to pass the Peace Corps Reauthorization Act this year. Coming together to support and improve the Peace Corps is an important step toward deepening our nation’s commitment to service and our nation’s highest ideals.